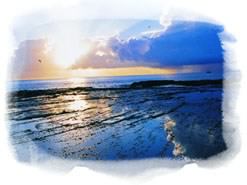 Due to the flat terrain and lack of high mountains, an orographic rain is impossible to occur. And the average annual rainfall is only 1000mm. Plus factors such as wind velocity, sunshine..., the annual amount of evaporation can reach 1600mm.

The rainfall in Penghu is neutral(June 1st, 1997, pH 7.69 according to the measure stand of the government). This is because this area has less air pollution, and less chemical compounds that cause acid rain. Also when the seawater evaporates into the air and forms the salt that suspends in the air and eventually is absorbed by the rainfall, it might even make the rainfall possessing basicity.
展開/收合
top