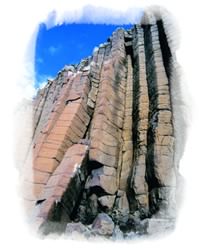 Its geology is made by the Pleistocene volcanism and is formed by pluton of andesite and pluton of basalt. Some rock layer formed after the last phase of the tertiary period is also mixed up within. As to the structure of it, penghu layer can be divided into 4 groups. From the newest to the oldest, they are seashore pile-up layer, Husi layer group, and the hua isle made by silicon rock layer is even older. It is the rock body of the Paleozoic era to Mesozoic era. And the layer which most penghu people inhabit is mostly yuweng layer gropu.

Basalt has the feature that pillar-shaped joint is hereby shown. It is lined up in order and form a magnificent view. In addition, during the formation, basalt can take a fine-dense form or a porous form. The porous form is made by the stomas left by magma crystal after its evaporate gas is eased. These stomas are filled by the mineral sediment of polychrome carbonic acid anion. Most of them are Graupel stones, and they are unique precious stones of penghu, also known as stones with pleasing streaks or mottles. The similar stones can only be seen in Italy.
展開/收合
top